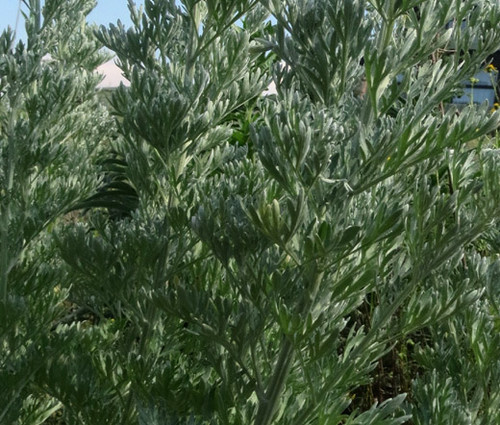 Wormwood Common makes an attractive addition to herb gardens, flower beds, borders, containers, and rock gardens, because of its silver foliage that provides excellent contrast to flowering plants. Wormwood herb plants have a long history as a medicinal herb, and it is still used to stimulate and aid in digestion. It is best to start Artemisia Absinthium seeds indoors 10-12 weeks before last frost, and it is recommended to harden the seedlings for 10 to 14 days before transplanting it outdoors. The established Wormwood is a very low maintenance plant that tolerates drought and likes to grow in poor dry soil, so water Absinth only when the soil has dried out.

Wormwood Common Artemisia Absinthium is a herbaceous perennial herb that is native to the Mediterranean regions of Europe and Asia, but the plant has naturalized in the United States. Also commonly called Absinthe, Absinth, and Mugwort and easily grown from Wormwood seeds, Artemisia Absinthium is widely grown for its super attractive, finely-divided, aromatic, silver-green foliage that adds interesting texture and contrast to garden, and in mid summer Absinthe blooms with yellowish-gray flower heads which appear in dense, leafy, drooping panicles. Mugwort are often grown as a moth repellant and a general pesticide.

(Absinthe, Grand Wormwood, Grande Wormwood, Green Ginger) With its classic silver-green foliage and nodding yellow flowers, true wormwood is a worthy garden plant and thrives on dry edges and in the full sun. This is the plant that is used for making traditional bitters, also an ingredient in absinthe. Traditional usage (TWM): vermifuge. Of course, unreasonably high dosage or extended use can prove toxic due to a buildup of thujone in the system. Sow tiny seeds on surface of sandy soil. A gratifyingly easy germinator and a long-lived plant on the landscape. In the fall, cut back to just an inch or so above the old growth.

Certified Organically Grown, Not for sale to South Dakota or Washington state.