Crush the bark, stems, leaves, seeds, and roots for the faint smell of almonds. All contain almond-scented cyanogenic glycosides that produce poisonous hydrogen cyanide when eaten. You may remember the tragic mare and foal deaths in May of 2001, caused by grazing on bluegrass contaminated by the droppings of eastern tent caterpillars that were devouring cherry leaves. Consequently, extension agents warn farmers not to pasture livestock in areas with overhanging cherry trees. Our caterpillars take advantage of this toxicity and transfer it to themselves by sequestering the cyanogenic compounds in their bodies.

Black Cherry is an important source of highly prized cherry wood and veneers for floors and cabinet-making. Unlike its cousins, the peaches and nectarines, it is not a human food source. The small black cherries are too bitter for humans, but eagerly consumed by birds. The seeds spread and germinate wherever birds fly, making the tree a pioneer species for re-forestation.

What if you were limited to only one tree in your life as a butterfly gardener? Black Cherry has many virtues, including caterpillar foodplant for two of our most beautiful butterflies. The Tiger Swallowtail soars at the crown of this 80 foot tree. And the poorly named Red-spotted Purple nectars its orange-spotted azure blue self near the ground.

A wide-spread native, Black Cherry adapts to temperatures from zone 3 to zone 9. This rapid grower flourishes in full sun and tolerates a wide range of soil and moisture conditions from Ontario south to Florida and west to Kansas, as well as Texas and Arizona with populations in Mexico and Guatemala. In an ironic twist, Black Cherry was transplanted as an ornamental to Europe. It quickly escaped and naturalized, reversing the usual pattern of rampant European weeds naturalizing our shores.

This member of the rose family has many names: Black Cherry, Rum Cherry, Wild Cherry, Wild Black Cherry, American Wild Cherry, etc. A rose by any other name? The Latin name, Prunus serotina, ensures proper identity and good communication among gardeners. Fortunately, the tree’s distinctive appearance makes field identification less problematic. Picture a tall tree covered with long white racemes of fragrant flowers in the spring. The shiny green leaves turn brilliant yellow and rose in the fall. Identification is confirmed by the unusual bark. The NABA website describes the bark of a mature tree as looking like “thick, burnt potato chips”. In contrast, young trees have smooth gray bark while saplings and small branches have smooth, shiny reddish bark with horizontal raised lines, the lenticels. 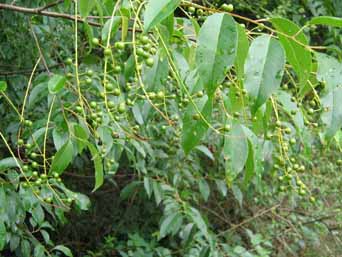 DISCLAIMER: These pages are presented solely as a source of INFORMATION and ENTERTAINMENT. No claims are made for the efficacy of any herb nor for any historical herbal treatment. In no way can the information provided here take the place of the standard, legal, medical practice of any country. Additionally, some of these plants are extremely toxic and should be used only by licensed professionals who have the means to process them properly into appropriate pharmaceuticals. One final note: many plants were used for a wide range of illnesses in the past. Be aware that many of the historical uses have proven to be ineffective for the problems to which they were applied.

Animals use the trees for shelter and nesting sites to raise their young. Rodents and birds eat the fruits. Insects are attracted to the nectar of the flowers.

The bark of cherry trees was used by Indians for a cough syrup. It is still used for that today. North American Indian Medicine

People harvested the cherries for jams. They were once called the poor man’s cherries. Warning: Bark, leaves, and seeds contain a cyanide-like glycoside toxin. The toxin is most abundant in the bark in the fall. Do not ingest any part of this plant.