Classical music ranges from operas and symphonies to concertos and chamber music. Based on findings from a Weber State University master thesis an experiment was conducted on plants and different types of music.

Each was placed in six chambers. The plants that received specific classical music from the Baroque period with adagio tempos, music that is played slowly, preferred this overwhelmingly by wrapping their branches around the music speakers. Indian Sitar music also had the same exact effect too. With that in mind its obvious classical music is the choice of music for plants and gardens. Also, adagio movements of baroque music and Indian Sitar are the very best of these music genres. Here now are ten songs, or classical music and Indian Sitar musical works that are recommended for your plants and gardens to thrive like never before.

Incidentally, all of the musical pieces listed are instrumentals. That is the preferred choice of music, in addition to the genre of classical music based on scientific studies. Tomaso Albinoni was a composer known better for his operas during the Baroque music period, but this is one of his famous works featuring an adagio. At Baroquecds.com there is a CD simply titled "Adagio." On its cover you will see beautiful plants and blooms that are thriving. It features baroque music with adagios or other slow tempos that are tailor-made for plants and gardens.

7.) Master of the Indian Sitar – Rash Behari Datta
Now we switch gears musically for the Indian Sitar music that is recommend to play for plants and gardens. If you want a variety of music this would be an excellent choice. More than likely you have heard of this famous piece of classical Indian music featuring the sitar that is a plucked stringed instrument similar to a guitar. The only difference beside its sound is the long extended neck and rounded gourd-like chamber. The first time the sitar was introduced in Western popular music was by The Beatles. "Norwegian Wood" was an album track off the Rubber Soul album from 1965. This CD by Rash Behari Datta features two tracks called ragas. These are melodic modes that are a combination of beautiful tones. Indian Sitar music has very unique sound altogether. You may feel like you’ve been transported to India. 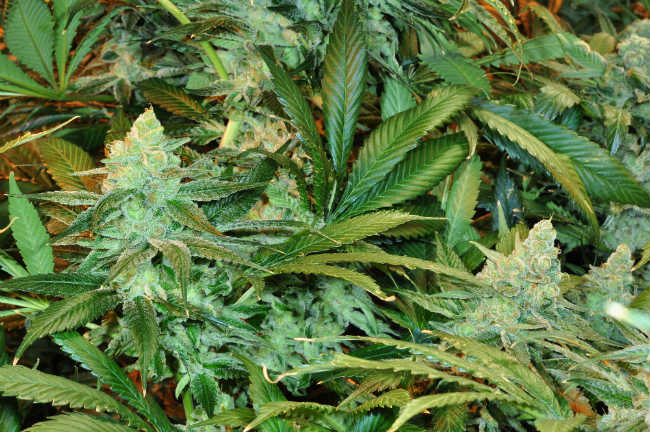 Next, she went on to test different genres: rock and classical music. She once again split her plants into three groups and played either rock music, classical music, or nothing. She found that plants who were exposed to rock music actively tried to “escape” the sound by turning their growth away from the speakers or “climbing” the walls of the enclosure. She also noticed signs of stress in the rock-and-roll plants resembling excessive water intake.

Have you ever played music for your cannabis plants? Tell us about your results.

It’s important to note that it’s not necessarily the genre that affects plant growth but rather the rhythm and harmony of the sound. Plants that are exposed to calming music like classical tend to fair better than those exposed to heavy metal which is likely due to the way plants have evolved and adapted to their environments.

Researchers have been studying the effect of music on plants for decades. Dr. T. C. Singh conducted a few experiments in 1962 in which he discovered that balsam plants grew 20 percent taller and had an increased biomass of 60 to 70 percent compared to control plants that were held in silence. Singh also noted that seeds grown in musical environments had an increased vitality rate and produced stronger characteristics such as improved leaf production and bigger leaves. Newer research has confirmed these findings.

Why Plants React to Music