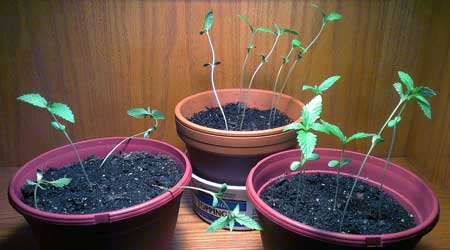 How big a difference does spectrum make to plant growth?

There is no “best” light spectrum for growing cannabis, but you can choose the best one for your goals and grow room!

There’s two main ways to increase the amount of light for your indoor plants: Though modern botany has benefited horticulture tremendously, we can’t assume to have mastered the metabolic complexities of plants, and we can’t succeed at gaming the light spectrum. The spectral needs of plants are complex, interwoven, and dictated by millions of years of full-spectrum sunlight; we shouldn’t presume to discard half of the natural spectrum in expectation of better results. The ability of LED technology to manipulate the lighting spectrum should be used sparingly and in service of mimicking natural diurnal and seasonal changes. These versatile new LED products offer tremendous improvements in efficiency — even without packing a board full of red diodes. To limit their application to a less effective spectrum does the entire technology a disservice.

His work has served as the central tenet of spectrum science and the foundation for other research building upon his key observations.

The new blue/red designs were well-intentioned and not without logic. Two loosely-defined spectra of light — blue and red — drive much of the action of photosynthesis. This much is true. Dr. Keith J. McCree, a pioneering researcher and founder of the McCree Curve, described these two spectra as peaking around 440 nm and 620 nm — blue and red, respectively. A wide body of research has confirmed this data, though subsequent research has found the absorbance maxima to be slightly different. The action of so-called “chlorophyll a” demonstrates a peak at 430 nm and 662 nm, while “chlorophyll b” is driven by 453 nm and 642 nm light.

Implementing LEDs creates significant efficiency improvements regardless of wavelength. But by skewing the PAR measurements with excesses of certain colors of light, some designs demonstrate efficiencies that don’t carry over into benefits for plants.

The reason for these problems was designers’ deviation from what worked (e.g. high pressure sodium (HPS) and metal halide (MH) spectrums) in favor of a supposedly ideal blue/red combination. This new spectrum was intended to give plants precisely the light they needed and nothing more. Omitting “unused” wavebands of light was thought to save energy. For reasons we’ll discuss below, the existing system of light measurement didn’t favor the new spectral profile championed by this design philosophy. These manufacturers imposed a change in the units of light measurement, and product comparisons became complicated.

But the new technology of LEDs didn’t align with the prevailing frame of measurement, so the units were stated differently.

But the McCree Curve is not a recommendation for an ideal horticultural lighting spectrum and, by McCree’s description, was orchestrated to provide a basis for the discussion of the definition of photosynthetically active radiation (PAR) — not the optimization of a growth spectrum. It explored if plants responded to the various colors of light and what was — and was not — part of the PAR spectrum. Accordingly, the experiment took a reductionist angle. McCree’s team tested plant response to one wavelength of light at a time, isolated in 25 nm intervals between 400 nm and 700 nm. A single cut leaf was placed in an isolation chamber and exposed to colored light while the carbon dioxide and oxygen levels were measured to deduce the metabolic response.

A Paradigm Shift: Lumens vs. Micromoles Per Second

In many ways, this flattened approach to the lighting spectrum makes sense, and for blue/red grow light manufacturers, it’s essential for marketing their products. Because of the absence of green light in their designs, the new products didn’t fare well when measured in traditional lumens. The increased blue and red light looked good when expressed in μmols/second of PAR, but not so good when compared to the system of measurement used by the proven technology of HID lamps.

The ability of LED technology to manipulate the lighting spectrum should be used sparingly and as a means of mimicking natural diurnal and seasonal changes to benefit plants, not marketing, says Rami Vardi.