The taste of Bob Saget is as following: Sweet, Chemical, Diesel and Sage and is know for the creative, happy, talkative, uplifted and relaxed effects. Ordering your Bob Saget seeds online is not possible, as soon as we know a shop which are selling Bob Saget seeds, we will post it here.

You want to buy Bob Saget seeds? Get yourself informed about the effects of the Bob Saget strain. Bob Saget is known for the following effects:

My friend and I smoke this out of the bond and gave a no disappointment. Very heavy high, but not couch locked you can still be doing activities.

Much like the aroma, the flavor at first has hints of sweetness and a unique floral element, but the aftertaste which lingers on the palate and in the throat (similar to Bubba Kush or Flo) is all Hanis superglue-chocolate funk.

This strain was created by master breeder Tierra Rojo (of New House Seeds) during the summer of 2010. The Ft. Collins S.A.G.E. mother is a very Sativa-leaning phenotype of that strain, finishing around 11-12 weeks and producing massive, bract-stacking colas — that cut was intentionally pollinated in early flowering by a Hanis plant which threw a couple of male flowers after being stressed late in flower due to hard flushing. The resulting pollen only managed to produce a scant 6 seeds in the S.A.G.E. mother, only one of which was planted. The rest of the seeds from this original cross have been lost to history, but the spectacular seed that was planted has hung around in clone form, being held tightly by a very select few in the Colorado area. The name of the strain came from a sloppily-written plant tag which appeared to read “SAGET” rather than “SAGE x” and just stuck because everyone thought it was funny.

Bob is an interesting Sativa in that it has such a strong Indica influence genetically, but the plant itself is extremely Sativa in growth pattern. This dichotomy shows in the effects, which start off very Hazy, cerebral, visual, and energetic, and then covert into a stoney, sedate, mind-wandering state that borders upon a “crash” later in the duration. Bob is one of those strains that you can smoke again an hour later and get right back to where you were, and the ceiling is rather high as well, with little tolerance buildup due to regular use. Due to the relaxing second half, it’s normally best as an early evening strain, though smoking on it all day will keep the user’s mind active and stave off the typical Sativa crash which often comes as the 2nd hour of effects approaches.

Bob Saget is great for very mind-engaging activities such as creative tasks or video games (easy to get “in the zone” with either one) but not quite as great for conversations, as the mind-racing going on inside the head often overrides the conversation with others. As it winds down, the mind becomes a little slower and a soft cloudiness sets in, while the body also seems to relax from the near-frenzy of activity which constitutes the first hour of effects.

Perhaps the Bob Saget’s most signature trait, the aroma certainly takes most strongly after the Hanis “father” plant, blending a complex, sharp chemical scent which almost resembles acetone with a slight sweetness. The initial inhale tends to bring more of the sweetness, but as the buds are broken apart, the acrid paint thinner side comes out very strongly, tingling the nose like few strains can. The Bob (like Hanis) is almost not recognizable as cannabis scent-wise because it is so strange and unique.

One of the most unique-looking plants we’ve had the pleasure of photographing here at PotGuide, “the Bob” (as it’s also known) is a freak confluence of quality genetics which produced a plant which is perhaps greater than the sum of its parts. Combining the signature Hanis nail polish/acetone-meets-chocolate aroma and flavor with the Sativa growth pattern and yield of the S.A.G.E., Bob Saget is extremely resinous and has almost no leaf aside from the actual fan leaves. The effects are uplifting and borderline racy at first, but mellow out slightly into a lightly psychedelic, but still buzzy experience, before crashing out at the end as many strong sativas do.

Bob Saget is an almost otherworldly-looking plant, taking strongly after both the 1994 Positronics Haze and the Ft. Collins S.A.G.E. with its large bracts and lack of leaf coverage — it often grows in stacking columns of bracts with an outstanding coating of trichomes, which appear to grow in cornrow-like formations, often fitting together much like the teeth of a zipper. The plant is normally a greyish green color, but takes on tones of the Hanis’ rich purple as it finishes, at times coming out almost entirely purple-gray in color thanks to the trichome coverage. What little leaf matter is present on The Bob is practically shrouded in trichomes, including the undersides of leaf surfaces, which are featured in the photo album above.

Bob flourishes in coco coir with a well-aerated mix (coco-perlite sandwiches, for example) and relatively heavy feeding. The plant stretches a fair amount when kicked into flower, but isn’t one that will get so tall it falls over under its own weight or anything. SCROG or similar training is recommended to maximize yield, and heavy feedings early will set a solid foundation for lots of bract growth and a more dense structure. Moderate to light organic feeding normally results in a fairly airy plant, but one with an incredible aroma and flavor, as well as some of the largest individual bracts you will see on cannabis. 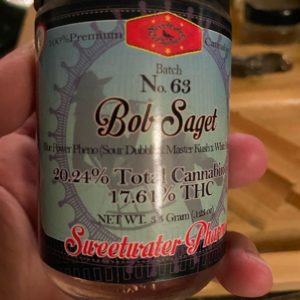 Deep tasty smoke, pine earth vibes. Sweet strawberry aftertastes on the back of tongue roof of mouth. The high was quick then gone after about 35-45 mins so roll yourself a bigger joint or make 2 bong loads.

Testing out at 17% THC #BOBSAGET63 is a light green strain, roasted with resin and trichomes – type of herb that expresses slight Kush and maybe some tangerine or orange, but it is super subtle. I always take the suggestions via my bud tender and so far so good! Bud was not overly dry or anything so I did what I usually do and broke by hand for first bowl and used grinder for 2nd. Cracking them expresses similar nose hits, slight Kush, slight fruit.

The mids label some heavy smokers will put on this based on THC % will make you double think, but as an avid smoker of all levels and highs, I really would recommend this for a fast head rush and mild body relaxation. If you like to laugh this will help for sure. Leaves me uplifted and aware as opposed to the “I’m so high I can’t function” strains.

@sweetwaterpharms #bobsaget #63 #weedreview Top of the Day and here we go: Bob Saget 63 certainly knows how to keep up the laughs thanks to SweetWater Pharma’s latest batch.

Nothing overly powerful. But holy cow. This shiz gave us the giggles.