Organigram spent CA$250 million constructing its facility, Rogers said. It contains over a hundred grow rooms, each of which can be tailored to the specific climate needs of a varietal.

This is due in no small part to the fact that Plena’s farm is in Columbia. It is situated over a thousand feet above sea level. Literally closer to the sun, the plants get a higher dose of solar radiation. The growing season is hot and 365 days long.

Surprisingly, outdoor can be a better choice in a cold, wintery clime.

“You really have to look at it more agriculturally. And from what I’ve seen a lot of large companies haven’t,” said Rosenthal. “Yet.”

The ultimate factor is the goal, Rosenthal said. If you want a certain grade of cannabis, such as a gorgeous, stanky dried flower with a consistent quality, indoor could be better in spite of the upfront and maintenance costs.

Outdoor has its place and nature has a million benefits, Rogers said. But customizable, indoor rooms and evolving technologies are what suit Organigram’s purpose: consistent high-quality dried flower.

“There are merits to both indoors and outdoors,” said Zwicky. “You always need a bit of a blend.”

Preparing for such eventualities is a key part of any business plan. “If you were going to grow any crop, you would sit down and make your production plan. You would look at how much money you would spend on different input, and also look at how your production and labour are going to work within regulations.” Of particular importance is the MMPR – the Marijuana for Medical Purposes Regulations, which govern the production of pot for legal use and sale in Canada.

“The main thing that’s important is to make a boutique brand rather than a mainstream one,” Adams says. “As long as that mom and pop store is able to market to its local consumers, it will stay in business. And people in its area may even buy more than they would from, say, Advil because they know them and trust them and like their brand.”

There were, of course, “various growers doing it long before it was legal” but even pot veterans find their expertise distinctly lacking. “People have done the best they can given the resources,” Adams says – but growing marijuana for personal use or illegal sale isn’t the same as running a professional operation. “I’ve noticed that there is a pretty big labor shortage in the marijuana industry,” says Adams. “That’s one of the major problems we’re facing right now: there’s no training anyone can take.”

3. Build a client base – and keep them

Growing and selling marijuana the proper way is rather more difficult than simply popping a plant under a black light in your closet. Doing it right means planning to grow on a large scale – and planning to deal with large-scale problems.

That’s where Adams and the programme come in. “Having a standardized education system is going to be important to the licensed producers and anyone doing it legally going forward.”

One advantage the educated and licensed pot purveyor has over his illegal competitors is consistency. “With legal products you know exactly what you’re getting,” Adams says. “There are pesticide tests to make sure there are no residues on the plants. If you get it from an illegal supplier, those guys aren’t allowed to test their products. You have no idea what they’re putting on their plants. You don’t know how they’re handling it. If you get it from a licensed producer, you know that it’s clean and a lot safer.”

If you’ve got a good product, you’ve got to get it into your customer’s hands and have them come back. 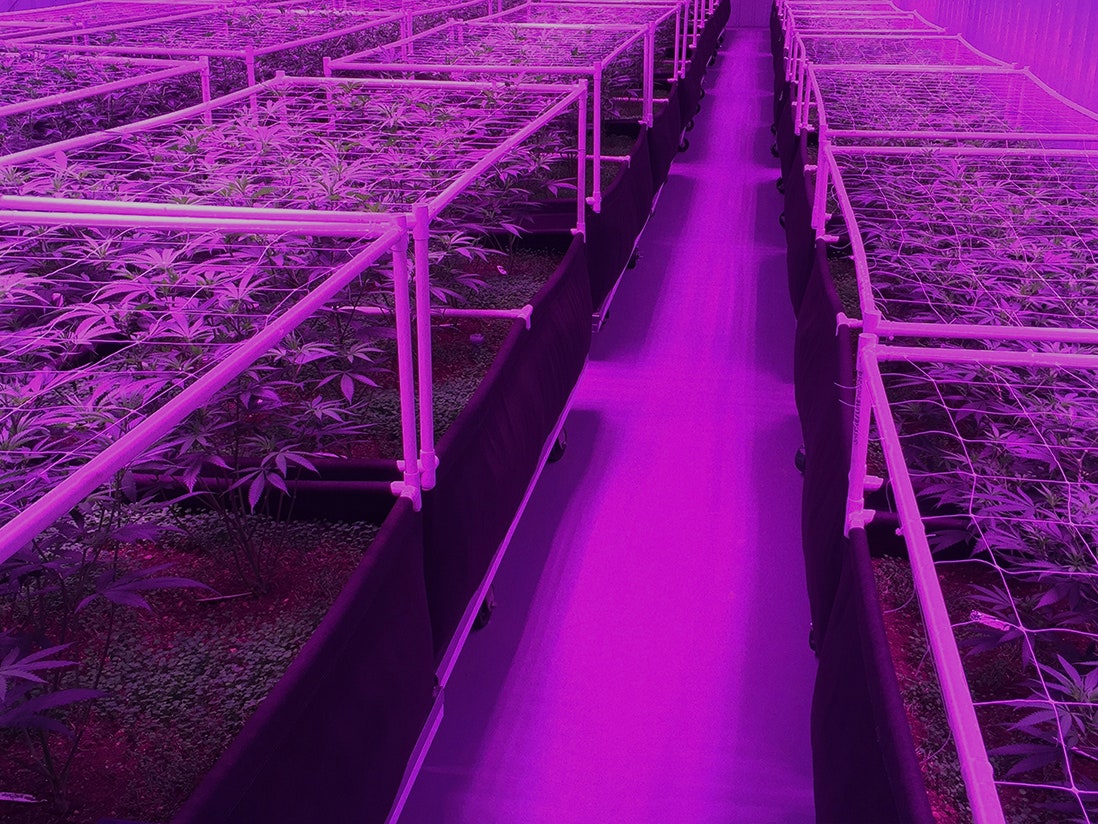 A few years out of graduate school in botany, Paul Gray found himself tinkering with the lights for growing Green Crack. Yeah, that Green Crack: the strain of weed so strong that none other than Snoop Dogg—according to ganja lore—bestowed it such a name. Gray wasn’t just messing around, though. He found that growing Green Crack under light-emitting diode lamps could make the already potent strain even stronger.

To revist this article, visit My Profile, then View saved stories.

Boudko found that conventional weed-growing wisdom pointed to high-intensity discharge lamps, basically the lights you see shining down on stadiums. Growers typically use metal halides for the early vegetative or “veg” phase, and high-pressure sodium lights for the flowering phase.

LEDs offer two main advantages: One, they give off specific wavelengths of light that can be fine-tuned to the plant and its stage of growth. That’s why you see so much blue mixed with red, or magenta, light. (More on that later.) And two, they use way less energy—up to 60 percent less than traditional bulbs, by some accounts. Indoor marijuana farms are a notorious energy suck, and stories abound of illegal farms getting busted by their electric bills. So yes, illegal farms have an obvious incentive to cut their power bills. So do legal growers, though, who can save money and burnish their eco-conscious reputations at once.

To revist this article, visit My Profile, then View saved stories.