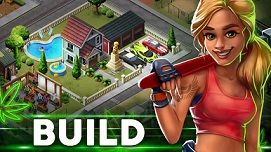 So these are the best weed farm games for Android & iOS. If you know more games, share them in the comment section below.

Hempire is one of the best weed farm games available on Android & iOS platforms. LBC Studio released this game back in 2017. It has top-notch graphics. Animations are good. You will set up the pots, plant weed seeds, water them, harvest them, and sell to the customers in the nearby area for cash. As you plant and harvest, you will gain EXP to level up. Leveling up in Hempire unlocks new buildings that help you grow the weed business. There are lots of strains to discover through the breeding process. Character’s missions will keep you busy all the time.

Metamoki released this game back in 2017. It’s the most popular weed farm game out there on Android & iOS platforms where you build the weed empire by growing weed in a small area. It is based on the standard idle clicker mechanics where you tap to plant, generate coins, and make upgrades to progress further. All you have to do is collect the coins by tapping, water the plants to upgrade and unlock all the strains.

It’s a story-driven weed farming game by LDRLY. You will meet a lot of characters in the game and progress through the chapter mode featuring lots of episodes and missions. The storylines of the characters are great. It’s based on the idle mechanics where you set up the business and deploy the characters to automate the stuff. You will build, get customers, make money, and progress further in the storyline. The graphics are nice. The gameplay is fun.

Weed Inc is another idle clicker game by Metamoki featuring the weed farm business gameplay. In the game, you will manage the weed shop in popular areas; customers will visit the shop and you will sell them their favorite stuff. There is a variety of strains that you can unlock and produce for all sorts of customers. You can hire the managers to automate the work. Grow, sell, make money, expand to all the cities.

In this game, you plant the weed in a room. First, you plant the seed, then water it, and then harvest it. After that, you can sell it to the client for cash. Use the cash to buy seeds so that you can plant more. There are lots of strains to grow indoors and outdoors; bush weed, Sativa, Indica, White Widow, Purple Haze, Alien Strain, OG Kush, Muay Thai, and more. Grow, sell, make money, and expand!

Few things pair together quite as well as smoking weed and playing video games. Sure, you could enjoy a good book, but pot can be a little distracting. Video games are also distracting, which is why they are great to play when you do not want to think too much. It’s also why many people can’t smoke weed without playing video games .

So, in the spirit of journalism, we played some of the most popular mobile weed games to separate the good from the bad, so you don’t have to. You’re welcome.

Three fun games for your iPhone or Android

Can you smoke weed in this game: Yes, you smoke a ton of weed. This increases your respect among your clientele and helps add a couple points to your energy meter. Just like in real life!

Welcome to Hempire: The World’s Greatest Weed Growing Game & Community Let’s Grow! •Grow weed and popular strains like Northern Lights, Hindu Kush, Jack Herer, and many more! •Prefer Indica? Sativa? Why not grow both!? •Breed new strains and hybrids in the Lab •Customize your favorite strains and grow some tasty buds •Turn your weed farm into a thriving cannabusiness Build a Marijuana Enterprise •Upgrade a. Hempire – Weed Growing Game is a Games app by LBC Studios Inc.. It has an average of 5 stars on the appstore and has been rated by over 22,939 people over it’s lifetime. The latest version of the app is version 2.2.0 and it was updated on the android store about 5 months ago.

In 4 Simple Steps, I will show you how to use Hempire – Weed Growing Game.apk app on your Phone once you are done downloading it:

How do I set up Hempire – Weed Growing Game?

To install the Hempire – Weed Growing Game.apk, you must make sure that third party apps are currently enabled as an installation source. Just Go to Menu > Settings > Security > and check Unknown Sources to allow your phone to install apps from sources other than the Google Play Store.
On Android 8.0 Oreo, rather than check a global setting to allow installation from unknown sources, you will be prompted to allow your browser or file manager to install APKs the first time you attempt to do so.