Gelato Kush is new to the Seeds66 program and we are already sure that it will become a bestseller.

Gelato has caused a stir in the San Francisco Bay Area. With the lineage of Sunset Sherbert and GSC Thin Mints Pheno. It not only tastes divine, it also looks absolutely stunning, with green and violet colored flowers that are lined with orange stamps that are covered with heavy, white resin. The pollen for Gelato Kush was chosen from a specially selected phenotype that we got from a top breeder friend. The pod was our own OG Kush from Oakland, California, a variety that is known to consumers around the world. She traveled from Florida to LA in the mid-1990s and became a firm favorite in our program due to her pine / lemon / diesel smell and taste and high dose of euphoria.

If you’re looking for a strain with a delicious taste and a happy, yet strong and relaxing effect – let’s face it, who isn’t? – Then you may have found your Holy Grail in Gelato Kush. Gelato Kush is the culmination of the crossing of the two popular West Coast tribes Gelato and OG Kush.

Green Gelato is slightly more indica than sativa and was bred by crossing Girl Scout Cookies Thin Mints pheno. with Sunset Sherbert. This has to be one of the very tastiest strains ever and forms part of what RQS term their “dessert cannabis strains” collection. Bred with exclusive Californian genetics and delivering very High THC and very high yields.

Green Gelato can be grown indoors and outdoors and responds superbly to a broad range of manipulations including, low stress training, SCRoG, topping, fimming etcetera to maximise production. Indoor plants grow to a height of between 80 – 120 cm. and producing between 500 – 700 gr/m 2 in an 8 – 9 week period of flowering. Outdoors in soil plants will grow rather taller reaching a height of 150 – 200 cm. and yielding 800 gr/plant with norther hemisphere harvests in early October. RQS recommeds that whatever your growing medium the end of flowering should see a thorough flush with plain water in order to maximise and accentuate the full flavour effect. Towards the end of florescence there is a good chance of purple hues appearing in the buds and smaller leaves especially when night-time temperatures are a lot cooler, say 10°C or so, and this looks very striking alongside the orange pistils.

The taste is a blend of Kush, bakery goods and forest fruits with some earthy undertones. THC production is very high at 27% and CBD levels are low. The effect is a mixture of mental and creative energy accompanied by an almost jelly-like feeling in the body. Just make sure there’s a couch nearby! You’ll probably need to sit or lie down. 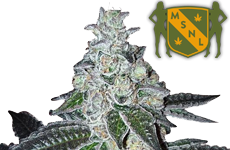 As your lungs fill with the velvet-like smoke of Gelato weed, you’ll instantly feel the world turning upside down. The effects take hold instantaneously, and an urge to socialize becomes very apparent.

The Gelato cannabis strain is dominant in THC.

Thanks to its California roots, the ideal climate to grow your Gelato seeds in is a Mediterranean zone. The Gelato strain enjoys full-sun, warmth, and low relative humidity.

Many users are lured in by the mouth-watering terpenes found in Gelato seeds, but the sheer potency is a bonus.

Read along to understand everything there is to know about the Gelato strain, such as must-have grow tips, cannabinoid profiles, and where to find a priceless pack of Gelato seeds.

The Best Gelato Feminized Seeds in 2022:

The Appearance of Gelato Weed:

Gelato seeds were produced by crossing the legendary Sunset Sherbet and the almighty Thin Mint Girl Scout Cookies. Gelato seeds are the offspring of the OG dessert cannabis strains that set the world on fire with their taste-bud-bending terpene profiles and sky-high potency.

As the sweet and savory terpenes bounce across your taste buds, your entire being is focused on enjoying the moment — only to wish that it could last one second longer.