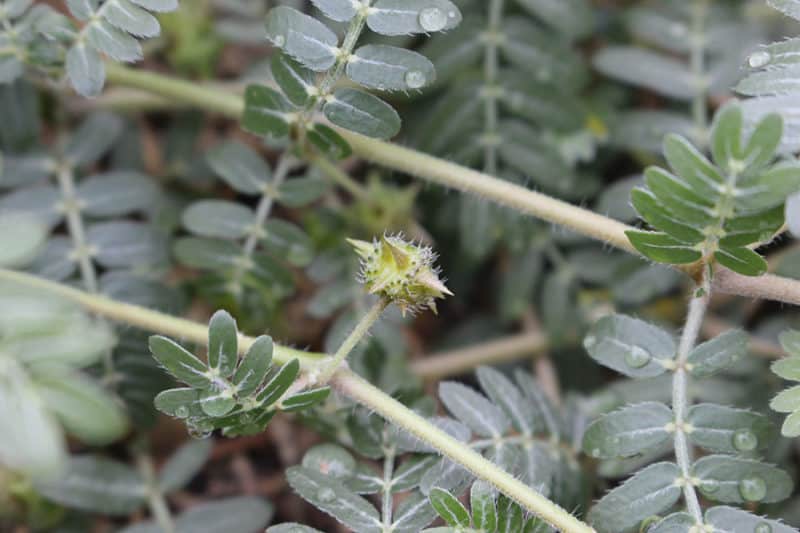 The plant typically flowers from April to October. After the flower blooms, the plant forms the spiny fruit. The fruit itself consists of five barbs that have several spiny points. They’re sharp enough to pierce your foot through your shoes, flatten a bicycle tire or injure the mouths of livestock.

Rake up any burrs you see around the plants so that they don’t establish into new plants. You will want a pair of heavy leather gloves when you deal with the burrs.

Goathead is an invasive species that is native to the Mediterranean. It easily outcompetes native species by smothering them. This causes a lack of diversity and it harms wildlife. Native plants and animals evolved together and support each other, so when an invasive species takes over, it’s bad for the entire local environment.

Sheep are particularly sensitive to goat head weed, and it can cause them to have a photovoltaic response that results in sensitivity to light. If they ingest the leaves, it may cause swelling of ears and lips. The burrs can also become tangled in the wool, which ruins the fiber quality and can cause skin lesions.

From a plant perspective, goat head weed (Tribulus terrestris) is a superhero. The fruits are covered with sharp spines or barbs that help it spread quickly. It has a deep taproot, grows in bad soil, and reseeds like you wouldn’t believe. You have to approach the plant with bravery and determination.

To get rid of this nasty weed, you have to know a little bit about it. Goat head weed typically grows as a ground cover, but in less favorable conditions, the plant will start growing upward to seek sunshine. The plants have a central crown and the stems radiate out in a dense mat. Stems and leaves are covered with hairs and the branches can grow three feet from the crown.

You can also burn the plants. Use a propane torch weeder to burn plants down to the ground. This may have to be done several times since they can regrow from the roots. Make sure you follow your local laws on burning.

You can purchase puncture vine weevils from biological supply companies, but this method has several drawbacks. Weevils location-sensitive and may not survive if you buy them from a company far away.

Weedy characteristics: Goathead thrives in hot and dry conditions where other plants cannot. Its dense mat smothers out other species. It can start flowering within 3 weeks of germination, and continues to flower all summer. Depending on the moisture available, it typically produces 200 to 5,000 seeds in one growing season. Seeds can remain dormant in the soil for 5 years. Its roots are hard to remove.

This is particularly useful to know right now because the first annual Boise Goat Head Fest is coming up, and if you manage to fill a garbage bag full of these noxious weeds before the end of July, you will earn yourself a drink token. Fortunately, this plant is fairly easy to identify; however, there are a few look-a-likes, so it is important to familiarize yourself with the plant in question so you can be sure you are pulling the right one.

Spotted spurge, also known as prostrate spurge, can be quickly distinguished by the milky sap that oozes from its broken stems. Its leaves are generally reddish purple on the undersides with a purple spot on top. Its flowers are minute and its seeds even smaller. Because its sap contains latex and other chemicals, it can irritate the skin and poison creatures that dare eat it.

Purslane has tiny, yellow, five-petaled flowers similar to puncture vine; however, its leaves are glossy and succulent-like and its stems and leaves often have a red to purple hue to them. Purslane seeds are miniscule, and while the plant can be a nuisance in a garden bed, it poses no threat to bicycles or wildlife.