They grow from 12″-36″ high. The yellowish-green sheathed flowers in late spring have a very long slender spadix (“rat’s tail”) extending from the top of the spathe. The fruit is a cluster of berries that turn red when ripe. The plant is not self-fertile. The small flowers encircling the spadix are dioecious (individual flowers are either male or female) and are pollinated by flies. I have seen statements that only one sex is to be found on any one plant, so both male and female plants must be grown if seed is required. But most references state that, as with other Arisaema, a specific A. dracontium plant can have flowers of either or both sexes; it “changes sex” from year to year depending on age and conditions, so you just need to have a few plants to produce seeds.

Propagation: Arisaema dracontium is easily propagated from seeds. Clean off the pulp, plant the seeds promptly or store cool and moist in the refrigerator. Cullina claims that the seeds will germinate after dry storage, and they need cold stratification for 3-6 months. I just place the cleaned seeds in moist potting mix in a zip lock bag and put them in the refrigerator until early spring, when I move them to warmth under lights. They can bloom in 2-3 years.

Characteristics: Green dragons usually have one compound leaf, but it looks as though there are more, with 7-15 leaflets arranged in a semicircle. When viewed from the side, it is possible to imagine a silhouette of dragon wings, with the central leaflet (often a bit lower) as the head. But I have also read that the name may come from the long “serpentine” spadix or that the large corms could look like dragon’s feet.

Cautions: Arisaema dracontium contains calcium oxylate crystals. These cause an extremely unpleasant sensation similar to needles being stuck into the mouth and tongue if they are eaten, but they are easily neutralized by thoroughly drying or cooking the plant or by steeping it in water. Some people have skin reactions from handling the plant or seeds.

Culture & Habitat: Green dragons are native to floodplain forests and edges of marl ponds from Quebec to Minnesota, south to Texas and Florida. Thus it should have moist organic soil in shade. Small offset corms are formed once the original corm gets large; these eventually detach and grow on their own. The best time to move or divide green dragons is in the fall when the plants go dormant. While the green dragon population is apparently safe in the state (S4), it is not that common in Tompkins county. Only move garden specimens, not wild! 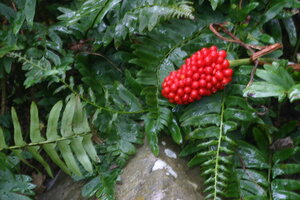 Arisaema dracontium, or green dragon, is what I call a “twofer.” It blooms in April, then the second half of the twofer begins in September as its seeds ripen, turning waxy, fiery-red.

Arisaema dracontium (which is native to most of eastern North America and the US Midwest) is a late riser. It does not emerge until well after jack-in-the-pulpit (A. triphyllum). In my Indiana garden, that is around the very last of April with warmer winters and the springs we’ve been having recently. Sometimes it’s the first part of May.

Companions for a dragon

After the plant has bloomed and set seed — come late August and September, in my area — the shiny green clusters of seeds will change color. Tall stalks will break and fall over so the seeds will be sown away from the parent plant.

Arisaema dracontium (green dragon) is a perennial herb that is widely distributed in eastern North America. However, in Canada, at the northern edge of its distribution, the species is designated as “vulnerable” with respect to conservation status. In natural populations, seedlings are uncommon; the present study was undertaken in order to characterize seed and seedling properties in green dragon. Seeds were sampled from five sites, ranging from Ontario at the northern limit of the distribution range, to Louisiana in the south. Seed germinability ranged from 25 to 55%, depending upon source. Experiments indicated that neither the hard seed coat nor a water-soluble exudate from the seed was responsible for inducing or maintaining dormancy. Patterns of seed germination appear to reflect general climatic conditions at the sites where seeds had originated. Cold stratification at 3°C produced significantly greater relative germinability in all seed collections except the most southerly one, from Baton Rouge. These seeds also had a slower overall speed of germination. In contrast, germination of seeds from the most northerly site was promoted by cold stratification and occurred over a relatively brief period. Germination in alternating light and dark conditions decreased the speed of germination compared to germination in the dark, however exposure to light changed the phenology of germination by promoting development of adventitious roots and primary leaves in these seedlings.