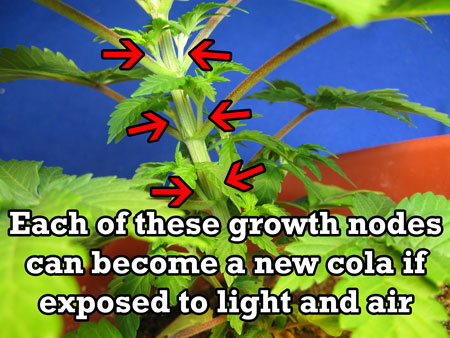 If you accidentally snap a stem while bending, tape it up immediately! Most of the time your plant will recover just fine.

Don't tie down your plants in such a way that you won't be able to tend them or move them! You'll regret it later! For example, don't secure ties to something on the ground, or something else in the grow space. Try to make a self-contained container that you can pick up and move without disturbing any of the ties. This is why so many growers attach ties to the sides of their containers.

Basically, you're training the plant to grow into the shape you desire, like a marijuana bonsai tree. You train the plant slowly and take care not to hurt you plant. You don't want to snap any of the branches, and never try to bend stiff branches or they'll just break off.

My main piece of advice is to make sure that you can pick up your plant as one unit. Don't anchor any part of your plant to the floor or it will be difficult to move your plant!

When the light source is directly above a plant, only the highest and broadest leaves are going to receive maximum light exposure. Vertical grow systems, however, expose more of the plant to its light source by placing it in the middle of the grow. Plants are encouraged to grow up the sides of the grow room, thus allowing for several planes of growth instead of just one, as the Sun does.

In the end, growers are left with plants that produce multiple, chunky colas instead of the one, large cola that results from traditional grow systems.

We all intuitively understand that plants grow up from the ground and toward their source of light: the Sun. So, the first cannabis grows mirrored this understanding by placing the lights on top of the grow and letting the plants grow up to them. As people began searching for better ways to grow, the community had a collective light bulb go off: vertical growing.

Here are two ways to improve your grow, even if you’re working with limited space. 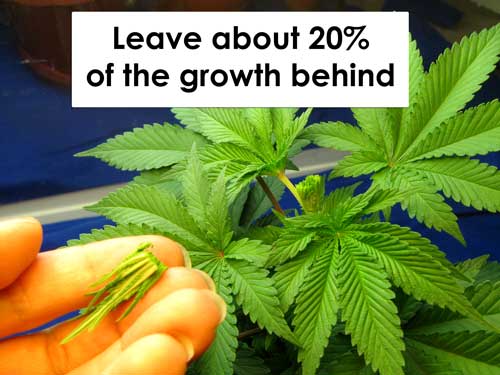 As a result of topping your plants early, you never end up with a plant that grows in the shape of a “Christmas Tree,” a growth structure that most indoor growers hate because it’s so tough to get good light coverage on a plant like that with indoor grow lights.

Because of easy tipping, I recommend weighting the bottom of solo cups if you use them, or upgrading to one-gallon containers.

The main way to control this is to bend over any colas or “branches” that are taller than the rest and keeping them in place tying them to something or using weights.

How to FIM Your Marijuana Plant

Hub: A place or thing that forms the effective center of an activity, region, or network.

For example, if you’re going to keep a plant in the vegetative stage for years, then you’ll definitely need a bigger pot.

Advantages of FIMing over Topping

Get the Correctly Sized Container Pot for Your Marijuana

Some also gently bend flexible branches until they snap slightly or crush the bent part between their fingers to cause slight damage to the bent point. This technique is known as super cropping.

You do not want to use any cutting method on your plant if it is in flowering, especially never do it deep into flowering. This is a building block technique to grow a plant with the structure you want, and doesn’t work as a cure for bad preparation.