Harvest happens sometime between September and November. This depends on your local climate, as well as the weather that particular year—one year it could be the end of September, the next, end of October, and growers in the Pacific Northwest will have to pull down their crops earlier than those in Northern California.

The biggest variability in how long a marijuana plant takes to grow will happen in the vegetative stage—after the seedling phase and before flowering.

When your marijuana plant becomes a seedling, you’ll notice it developing more of the traditional cannabis fan leaves. As a sprout, the seed will initially produce leaves with only one ridged blade. Once new growth develops, the leaves will develop more blades (3, 5, 7, etc.). A mature cannabis plant will have between 5 or 7 blades per leaf, but some plants may have more.

When should you grow marijuana?

Cannabis plants go through a series of stages as they grow and mature, and those different growth stages call for different amounts of light, nutrients, and water.

These factors have the greatest impact on total time from seed to harvest: 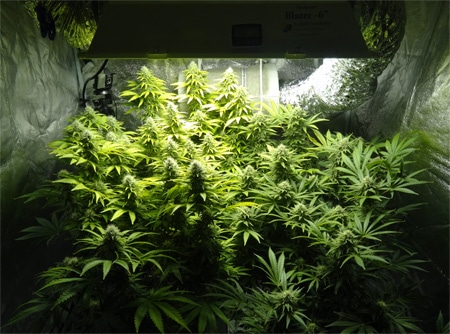 Average Time to Grow (and Be Ready to Use) Your Own Weed:
3 – 5 months

So, after you’ve bought seeds and equipment, grown a plant from seed to harvest, trimmed, dried and cured your buds, that brings us back to the original answer…

This human-sized plant (one of my very first plants) spent a little more than 3 months in the vegetative stage before I realized I needed to turn it over to the flowering stage. It then spent another 12 weeks in the flowering stage before it was ready to harvest because it was a long-flowering strain. It got way too tall for its space (taller than me!) and started falling over. However, despite the huge size and more than 5 months of growth, it only ended up yielding about 6 ounces. This is because it was under weak CFL grow lights. Though there were a lot of buds, the lack of strong light made them airy, without a lot of weight. Click the picture for a close-up.

Time Needed to Grow Weed, From Seedling to Harvest

If you choose the right strain, you could be smoking your own buds as soon as 3 months from germination!

Utopia Haze is a mix of Brazilian landrace strains

Drying: 4 – 10 days
Good marijuana buds can be dried in as little as 4 days, but ideally, drying should be a slow process taking up to a week or more. Making sure your plants have been thoroughly dried (but not over-dried) will lower chances of mold during the curing process.

Before You Start Growing Weed

It’s not exact – There’s a 2-3 week harvest window for most plants, and keeping your plants in the flowering stage for a bit longer tends to increase your yields. This is because the plants tend to really bulk up their flowers once they’ve become ‘ripe’.