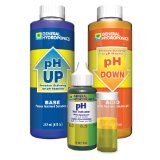 Get Clones – You need to know someone with live female cannabis plants if you want to get clones. Many cannabis dispensaries and collectives will sell clones to prospective growers, or you might know someone who can give you a clone. Learn how to make your own cannabis clones!

After your cannabis has been curing for at least 2 weeks, and they haven’t felt wet every time you’ve checked the jars for at least a week, you can start opening the lid once a week instead of once a day.

Step 5: Get Your Cannabis Plants (& Choose Your Strain)

There are certain types of grows (such as when growing cannabis in organic composted super soil) where you don’t need to test your pH unless you run into problems. This is because with a properly composted super soil, you actually have a microbial colony living in the soil that will take care of the pH and hand-deliver the nutrients to the roots of your plants for you. However, this is a rare exception to the pH testing rule, and almost all growers need to regularly test and maintain pH for a successful grow. If you’re not growing in super soil that you have amended and composted (or purchased) yourself, testing and maintaining pH is a MUST.

This cannabis growing guide will help you discover the best way to grow cannabis, for your unique situation.

Compact Fluorescent Light Bulbs (CFLs) & household LEDs are what people commonly use to light up their homes. They aren’t really made for growing plants, but can be a good way to get your feet wet in the growing world without a significant investment. They lack the power of dedicated grow lights, but can get the job done. CFLs and home LEDs like these are dirt cheap, and you can usually buy them from any big-box store without arousing suspicion. In fact, growing with CFLs is what I did for my first grow and I got them from a local Home Depot. I imagine that my first grow would’ve ended the same (or even better) had I used small household LEDs instead of CFLs, though they weren’t available back then. Learn more about growing with CFLs.

MH/HPS grow lights (like the light pictured here) are a type of “HID” light like LECs. A combination of MH/HPS is what most commercial growers use when growing cannabis indoors. They are surprisingly cheap to buy and set up, especially considering how incredibly powerful they are.