That said, when your plants are fully flowering, you might find yourself watering them daily, based on these indicators. When you do water them, keep going until you see water running off the soil, to ensure the water reaches all of the soil in the pot. 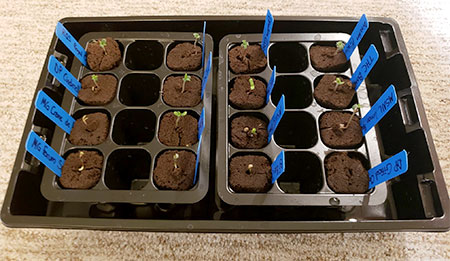 If you’re having a tough time deciding on a grow medium, you might want to think about starting with a mix of coco coir and perlite. It’s easy and low-maintenance. That’s how I got started growing (with CFLs as grow lights) and it’s also what I used in my 1-pound 315W LEC grow. Growing with coco coir can be a good choice for beginners because it’s cheap, holds water well, and doesn’t have as many of the problems associated with soil (bugs, root problems, etc.). Yet since it’s hand-watered, it’s intuitive and has a lot of the ease of soil growing.

It’s best that your plants get direct sunlight from at least 10am-4pm, and more light is better. Because of the high light needs of the cannabis plant (it needs more light than many other types of plants), it is not well suited to growing in a window (though I’ve seen plenty of growers start their seeds in sunny windows before moving their plants to a more suitable final location).

Step 6: How to Germinate Cannabis Seeds

Some lights tend to cause more heat problems than others, and we’ll help you find the right lights for your space in Step 2.

If the pH at the plant roots is too high or too low, your plants won’t be able to absorb nutrients properly.

Only feed nutrients at full strength if the plant is showing signs that it needs more nutrients (lower leaves are turning lime green, then yellow, then falling off – the first sign of a nitrogen deficiency, the most common type of deficiency – if the plant is not getting enough nutrients).

Cannabis legalization is spreading like wildfire across the US, Canada and in many other countries around the world. Many people are finally allowed to legally grow their own supply of cannabis!

One nutrient system to rule them all…