Some girls like a bouquet of a dozen roses, a box of chocolates or a Hallmark card, but according to Monroe, if a lover wants to woo her, he doesn't need to call up the florist — he needs to go find a stash. This song may be a little . adventurous for country music, with references to teddys, whips and chains to go with a weed-smoking romantic night, but bravo to a girl who can sing "Give me weed instead of roses / Bring me whiskey instead of wine / Every puff, every shot / You're looking better all the time" with a straight face.

Musgraves' Same Trailer Different Park sports a song that sparked controversy — and a whole lot of support from the fans. "Follow Your Arrow" encourages listeners to take their own path without worrying about what others think, whether it's kissing boys or kissing girls, being curvy or stick-thin or smoking a joint or not. Written by Musgraves, Brandy Clark and Shane McAnally, the lyrics are masterful and clever. The standout line, "When the straight and narrow / Gets a little too straight / Roll up a joint, or don't / Just follow your arrow / Wherever it points," is especially hilarious when Musgraves adds "I would" to that sentiment.

It's no surprise that Church is on this list, is it? The rocker's "Smoke a Little Smoke" gets right to the point, as he sings, "Dig down deep, find my stash / Light it up, memory crash."

For some, at the end of a long work week, when you're completely beat, nothing sounds better than sitting on the couch with your love and, well, getting high. In "Ready to Roll," Shelton's tongue-in-cheek lyrics take the cake: "We gonna burn all afternoon like it's something to smoke" and "I don't know about you, but I'm ready to roll." Yeah, we're pretty sure it's that type of rolling he's ready to do. Why? Because he says, "You go grab those tater chips / I'll whip up some party dip / And well kick back and take a trip."

“Weed Instead of Roses”

One of the songs that should definitely be played on 4/20 is the Pistol Annies' rockin' and rousin' "Hush Hush." Miranda Lambert, Angaleena Presley and Ashley Monroe's lyrics are straightforward, shaking out the issues about dysfunctional families that are so often hidden under the rug. The pot-infused lyrics in this song are, "So I snuck out behind the red barn /  And I took myself a toke / Since everybody here hates everybody here / Hell, I might as well be the joke." The song's music video takes place at a church potluck, which makes these lyrics even more hilarious.

First made popular by Old Crow Medicine Show, Rucker turned "Wagon Wheel" into a smash hit with country fans. And even though Rucker's songs are generally pretty lyrically conservative, even he was able to sneak in a reference to pot on his True Believers record: "I caught a trucker out of Philly / Had a nice long toke," he sings. The father of three may just have to explain that line to his kids when they get a little older!

The following are The Boot's picks for the Top 10 country songs about marijuana:

“Roll Me Up and Smoke Me When I Die”

This song doesn't just reference smoking once or twice; it's pretty much all about Mary Jane. It's a song for anyone who's bored with how mundane life can be — in this case, a mom who hates her husband and her job, but loves her kids. To get through those times when she misses the days of her youth, she sits down at the kitchen table to "roll herself a fat one." The chorus tells the downtrodden that sometimes the only way to get by is to get high. So, the mom in the song tucks her kids in at night and prays, saying, "Lord, help me accept what I cannot change / But until I learn to do that / Thanks for the Mary Jane." 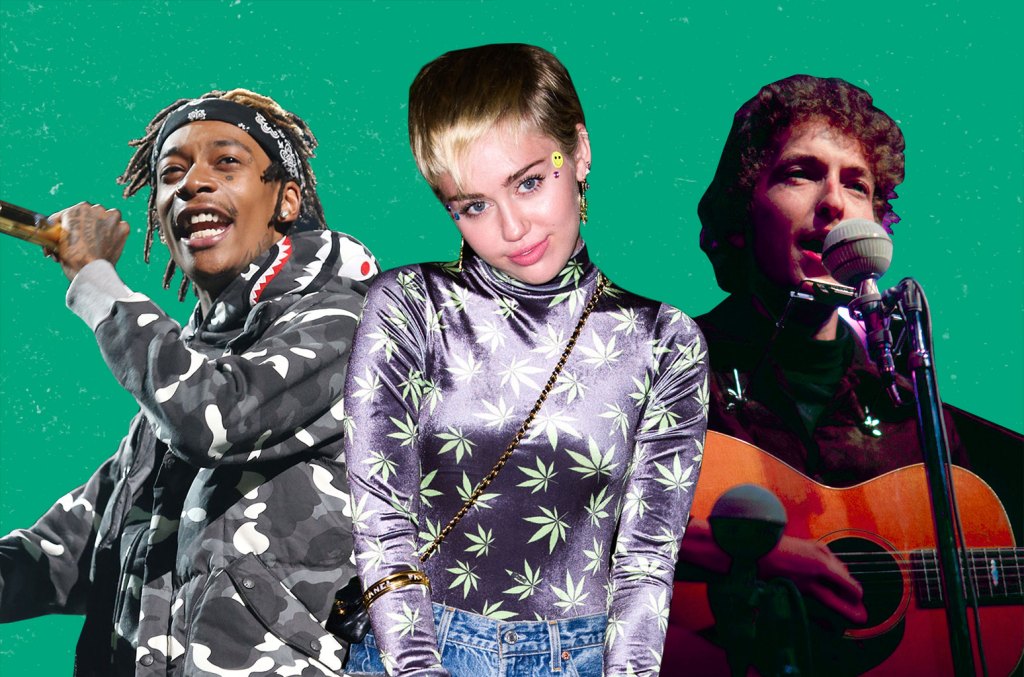 Billboard has put together a countdown of 25 tracks that talk about toking up, with each song including a “potency” level that measures their inebriated energy on a scale of one (mildly buzzed) to 10 (totally stoned).