How To Grow Chillies & Sweet Peppers – Part 1 (Video)
An instructional video by Stephen on the basics of caring for chillies and sweet peppers in the first few months.

Thought to originate from Mexico, South America or Central America.

Chilli Sauce Recipe
A quick and easy recipe for chilli sauce. Experiment with different varieties of chilli peppers to get just the right amount of heat for your tastebuds.

Chilli Pepper & Sweet Pepper Heat Guide
A guide to the heat levels of sweet peppers and chilli peppers – from the cool to the volcanic. Also details on how Chilli Pepper heat levels are measured.

This beast is a pretty big superhot pepper as it can grow as large as 4 ounces. WOW! The Jigsaw makes it one of the largest and heftiest of the superhot peppers. It has been described by Hot Pepper YouTube reviewers as the gourmet superhot with bursting unique flavors of smoky-sweetness. The Jigsaw pepper is a cross between the Moruga Scorpion and Naga Morich, which results in a heat that has a gradual and consistent build to it.

Check out the Gator Jigsaw, another Jigsaw variety! 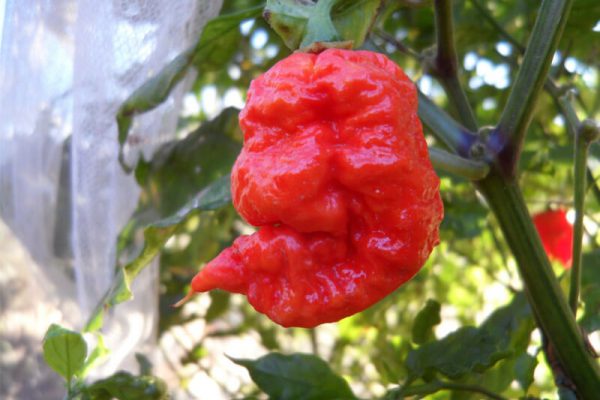 Jigsaw-(Capsicum chinense)-This is a cross created sometime after 2010 by a grower in Finland named Jukka. It is also named after his chile company Fatalii with the name Fatalii Gourmet Jigsaw. It is believed to be a cross between a Moruga Scorpion and a Naga Morich. Jukka claims it to be one of the hottest peppers in the world. Since it is a fairly now cross strain it will not have the most consistent pod shapes. The peppers ripen from green to red and like most superhots they have a rough pimply texture on the outer skin. The flavor is described as fruity floral. The Jigsaw chile plants grow between 3-4 feet tall.

” At Refining Fire Chiles we isolate our seed production plants to avoid cross-pollination with other chile species. If you want to grow your own chiles, you can purchase seeds right here, or full plants (April-July) and have fresh chiles by September. Refining Fire Chiles Jim (Habanero) Duffy