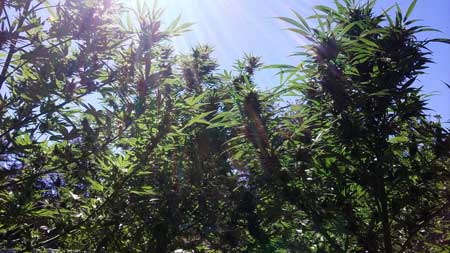 When it comes to plants, the type of light we can see, and the type of light they can use are pretty close. So even though lumens don’t measure light exactly as a plant sees it, it does give us a good general idea of how bright a light is to plants for many types of grow lights. Not perfect, but a good ballpark figure.

But cannabis is definitely not the same as lettuce and it doesn’t necessarily mean that adding green light will increase your cannabis yields! Nearly all grow lights provide some amount of green and it seems like adding too much green probably would hurt yields. But getting enhanced growth from green lighting is something to explore, especially for LED growers who often don’t give any green at all!

Blue light is very important. Without at least some amount of blue light, most plants won’t grow normally. The plant has several different ways it measures blue light, and they each have their own effects. For example, when you see a plant growing towards the light, it’s actually only responding to just the blue light. Without any blue, the plant wouldn’t know where to grow!

So what’s the “best” light spectrum for growing cannabis? Unfortunately that’s a big question since each spectrum has its own unique effects and some are more useful to you than others, but let me share everything we know so you can decide what’s best for your goals and situation.

As just one example, during the spring and summer, more of the blue spectrum of light makes it to earth because the sun takes a more direct path through the sky.

Red light is probably the most important type of light for plants. When it comes to photosynthesis, plants are best able to make energy out of red light. In fact, many plants can actually grow even if they only get pure red light, though they won’t grow as big or as healthy as they do under full spectrum light. Every type of grow light, even ones that are rich in blue like metal halides, provide quite a bit of red light.

Green light has been shown to be involved in seedling and vegetative development, the initiation of the flowering stage, CO2/water usage, stem growth and overall plant height. There’s probably more we don’t know about yet!

During the peak of summer, when plants are in veg, there’s a lot of blue light. As fall rolls around and it becomes time for reproductive growth, the light has a lot less blue light and more red. That’s because the blue light gets filtered out when the Earth tilts away from the sun and the light has to pass through more of the atmosphere. The atmosphere diffracts the blue, so there’s less for plants.

At the end of flowering, in the final 3-7 days, growers return to a spectrum with lots of blue light. Sometimes, they switch bulbs from HPS back to MH (if their ballasts are compatible). Or — if they’re running tunable LEDs — they can simply change the settings on their controller.

But why does blue light matter in the vegetative phase? And why does the reddish HPS spectrum work better for flowering? The answer comes from the natural seasons.

It’s important to give your plants the blue light they need — especially in veg. With blue light — either from LED or MH lights — plants show robust lateral growth without extension. What’s more, plants grown with a spectrum that’s rich in blue have thicker, darker leaves than those grown without blue light, and that prepares them for a robust flowering period.

When we talk about colors of light, we’re really referring to their wavelength; it’s the wavelength of a light source that makes it appear blue, or red or green. The visible light spectrum spans from violet/blue light which has short wavelengths (ranging from 400-500 nanometers) to red light, which has the longest visible wavelength of around 700 nanometers.

Blue light is critical for cannabis. If blue light levels are low, cannabis plants experience a shade-avoidance syndrome that causes them to stretch. That’s because, to the plants, a lack of blue light signals that they’re in the shade of other, taller foliage.

Some growers have discovered a strange spectral trick to get higher terpene and cannabinoid levels. It goes against the natural seasonal light shift, but it can increase terpenes by a reported 50%.

Thanks to advancements in LED technology, modern LED grow lights can create just about any light spectrum. And that has growers asking: what’s the best lighting spectrum for cannabis?