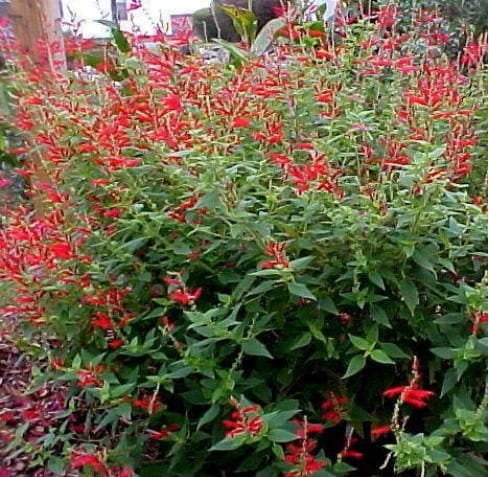 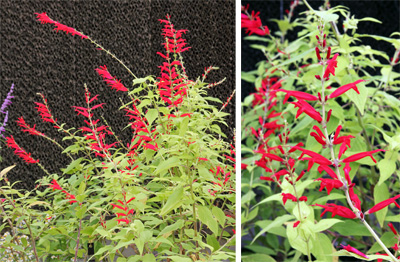 Pineapple sage, Salvia elegans
Salvia elegans is one of about 700 species in this genus in the mint family (Lamiaceae). This perennial subshrub native to the edges of pine and oak forests in the Sierra Madre del Sur mountains of Mexico and Guatemala was introduced as an ornamental garden plant around 1870. Hardy only in zones 8-11 it is grown as an annual in cooler climates. The common name of pineapple sage comes from the scent of the leaves when crushed, although the strength of the aroma varies depending on weather and moisture levels.
Pineapple sage has an open habit.
This species is a rangy, semi-woody to herbaceous shrub that produces an open-branched clump of erect, square stems covered with yellow-green leaves. Tall stems are susceptible to wind damage, often breaking off at the base.
Pineapple sage leaves have a fuzzy appearance.
The opposite, ovate leaves are 2-4 inches long with serrated edges. Both leaf surfaces area covered with short, fine hairs, giving them a softly fuzzy appearance. Although the species can grow up to 5 feet tall and 3 feet wide, the cultivars are usually much shorter. The plants die back to the ground after a hard frost, and in mild enough climates will grow back the following spring. Pineapple sage is fairly fast growing, so it can be grown as an annual in colder areas where it will not survive the winter.
Pineapple sage blooms late in the season, so flowers often do not appear before the first frost in the Midwest.
Pineapple sage blooms late in the season, producing tubular scarlet-red flowers that are attractive to hummingbirds – although in the Midwest the plants frequently don’t start blooming until after the ruby-throated hummingbirds have already departed the region on their migration back to Central America for the winter. These are short day flowering plants, so will not bloom if grown where artificial lights (such as street lights) extend the day length in fall. Where there are no frosts (or indoors, in a greenhouse), plants may continue flowering until spring. The flowers are produced in whorls with 4 blossoms at each node along the terminal inflorescences, opening sequentially up the flower spike. Each 1-2 inch long flower has a hood-like upper lip and a spreading lower lip typical of salvias. Flowers are followed by small, dark-colored, football-shaped seeds that fall out of the calyx within a few days of fully ripening.
The flowers of pineapple sage start in a recurved inflorescence (L) that straightens up and flowers bloom sequentially from the bottom up (LC). The flowers are produced in whorls (RC) and each flower has a hood-like upper lip and a spreading lower lip typical of salvias (R).
Pineapple sage is often grown for its vibrant foliage rather than the flowers.
Because it blooms so late in the season (and often is killed by frost before flowering) this plant is often grown primarily for its vibrant foliage that contrasts well with so many other annual or perennial plants with typical green leaves. Combine it with plants with dark-colored foliage or dark purple petunias for maximum contrast. Use it in beds or borders where it can turn into a large, bushy plant in a single season, or add it to the herb garden. It is easily grown in a container, which is more convenient to move inside to keep over the winter than digging and potting up plants in the ground.
Grow pineapple sage in full sun.
Grow pineapple sage in full sun in moist, well-drained soil. Plants will wilt if too dry; leaves will begin to curl up when the plant is dry. Keep evenly moist throughout the season to prevent leaves from dropping. Plants can be pinched when young to produce more branching for denser growth. Old, woody shoots can be removed when new shoots appear (this may only be in spring for overwintered plants). It has few pests outdoors and is not preferred by deer, but is susceptible to aphids, mealybugs, and spider mites in greenhouses.
Both the leaves and flowers are edible and when fresh can be used whole as a garnish or in salads or desserts. As an herb the leaves and flowers can be used as a tea. Both leaves and flowers can also be used in jellies or for potpourri. Snip young, tender leaves in the morning to use as needed throughout the season.
There are a few cultivars of pineapple sage:

Pineapple sage can be grown from seed, but the cultivars are propagated from tip cuttings taken in fall or spring. Soft terminals with just leaves root more readily than those with flowers or flower buds or any with woody stems. Tip cuttings will root in water or most rooting media.
– Susan Mahr, University of Wisconsin – Madison

Some of the technologies we use are necessary for critical functions like security and site integrity, account authentication, security and privacy preferences, internal site usage and maintenance data, and to make the site work correctly for browsing and transactions.