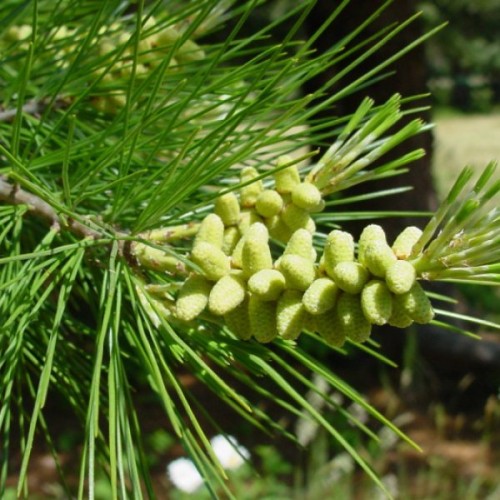 Renowned for its mammoth cones, this evergreen tree grows to gargantuan heights in its native haunts in the western North American mountains. In cultivation it is typically of more modest size.
The long, blue-green needles of this pine occur in bundles of five on horizontal to slightly drooping branches. In spring, trees produce tiny male cones and enormous cylindrical female cones near the branch tips. The solitary or clustered female cones are sheathed with fleshy green scales that turn woody and yellow-brown as they mature. Two-year-old cones open their scales to release large edible winged seeds before falling thunderously from the tree.
Slow-growing and of slender conical habit when young, this pine eventually develops an open, oval crown and a stout trunk. Its reddish-brown to gray-brown bark becomes deeply fissured and platy with age. If wounded, the trunk exudes a sugary sap that was prized by American Indians.
This beautiful pine favors full sun and moist, well-drained, humus-rich soil. It dislikes excessive heat, cold, or wind. It makes a striking specimen for parks and other large properties, although the falling cones can present a hazard. Sugar pine is also highly susceptible to white pine blister rust. (source: learn2grow.com)

FREE DOMESTIC SHIPPING
For all domestic orders $80 and over.

Indoor Planting: If your seeds require stratification or scarification – do the recommended pretreatment before planting indoors. Planting Instructions: Fill a container with seed starting mix to about ½ inch from the top. Place your seeds 1 inch to 1 ½ inches below the soil surface. Gently water your seeds to keep moist, not soaking wet. Heat & humidity is critical for germination. Germination may occur in 1 week or as long as 3 months (depending on the species). Place the seed container on a heat mat under growing light(s). Keep your growing lights on 14 hours per day. Keep your heat mat on 24 hours per day. Once your seeds germinate, move each seed into its own container under the growing lights and on the heat mat. Keep your seedlings indoors for 2-3 months before transplanting outdoors in the spring (May to June).

Dwarf mistletoe (Arceuthobium californicum) may seriously damage infected trees by reducing growth in height, diameter, and crown size, and predisposing weakened trees to attack by bark beetles. Extending throughout the range of sugar pine, except for isolated stands in Nevada, the south Coast Ranges of California, and Baja California, this mistletoe was found in only 22 percent of the stands examined and on only 10 percent of the trees in those stands. Spread is slow and can be controlled by sanitation cutting (20,42).

Sugar pine grows naturally over a wide range of soil conditions typically associated with conifer-hardwood forests. Soil parent materials include rocks of volcanic, granitic, and sedimentary origin and their metamorphic equivalents and are usually not of critical importance. Soils formed on ultrabasic intrusive igneous rocks such as peridotite and serpentinite, however, have low calcium-to-magnesium ratios and usually support open conifer stands of inferior growth and quality. Nevertheless, sugar pine is often the dominant conifer on the more mesic of these sites (39,40).

Sugar pine hosts many different insects, but the mountain pine beetle (Dendroctonus ponderosae) is of overwhelming importance. This insect can cause widespread mortality, often killing large groups of trees (48). Several other bark-feeding insects contribute directly or indirectly to mortality in sugar pines, particularly after periods of drought. Death results from predisposing trees to mountain pine beetle. The red turpentine beetle (Dendroctonus valens) is usually restricted to small areas near the root crown but during drought may extend two or more meters up the bole, destroying the entire cambium. The California flatheaded borer (Melanophila californica) usually attacks decadent and unhealthy trees, but trees under heavy moisture stress are also vulnerable. The California fivespined ips (Ips paraconfusus) is only capable of penetrating thin bark in sugar pine. Small trees are often killed, but large trees only top-killed (16).

Competition from brush severely retards seedling establishment and growth. Only 18 percent of seedlings starting under brush survived over a period of 18 to 24 years, and after 10 years the tallest seedlings measured were only 29 cm (11.4 in). Given an even start with brush, however, seedlings can compete successfully (11).

Light shelterwoods can protect seedlings of sugar pine and white fir against frost, which seldom affects ponderosa and Jeffrey pines, and provide them with a competitive advantage because of their greater tolerance to shade (13,43,44). On the other hand, young sugar pines stagnate beneath an overstory and in competition with root systems of established trees or brush. But because they respond well to release, the basal area increment of sugar pines is often double that of companion species after heavy thinnings (33). Thus, skill in the amount and timing of overstory removal is a key factor in successful silvicultural management of sugar pine.

Sugar pine reaches its best development and highest density on mesic soils of medium textures (sandy loam to clay loams) but ranges into the lower reaches of frigid soils when other climatic variables are suitable. These soils are found most commonly in the order Ultisols and Alfisols. The best stands in the Sierra Nevada grow on deep, sandy loam soils developed from granitic rock. In the southern Cascade Range the best stands are on deep clay loams developed on basalt and rhyolite. In the Coast Range and Siskiyou Mountains in California and Oregon, the best stands are on soils derived from sandstone and shale.

Among its coniferous associates, sugar pine is the most tolerant to oxidant air pollution (34), while intermediate in fire tolerance (39) and frost tolerance (43,44). It is less tolerant of drought than most companion species with which it has been critically compared, including knobcone (Pinus attenuata) and Coulter pines (50,51), ponderosa pine, Douglas-fir, incense-cedar, and grand fir (40).

Because site productivity is a function of several environmental variables-edaphic, climatic, and biotic-it is difficult to relate parent material groups or particular soil series with specific productivity classes, especially when they span wide ranges of elevation and latitude. Other factors being equal, the main edaphic influences on conifer growth are soil depth and texture, permeability, chemical characteristics, and drainage and runoff properties (5).