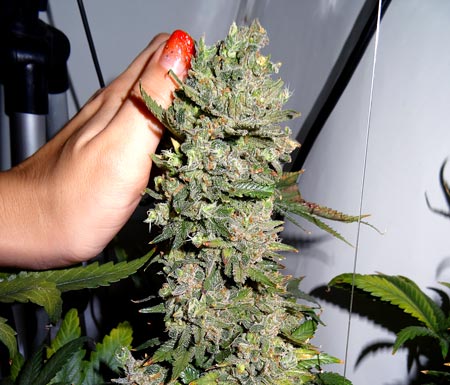 It’s tempting to harvest your plants when they look close to the finish line. Yet early harvests not only reduce yields (bud size increases dramatically in the 2-3 weeks before buds are ready to harvest), the potency is also lower. You’ve grown your plants for about 4 months on average, don’t skip out on a few more weeks!

Notice how all the buds near the bottom of the plant never fattened properly because they were too far from the grow light. These plants should have been switched to 12/12 earlier. Or…

When it comes to LEDs, not all models are the same. You’ll often get much better results by investing in a good LED grow light. The extra money pays for itself with better yields and results.

Plant twist tie holds stems where you want them

It was defoliated and then allowed to grow for 3 weeks

Cannabis plants are typically either male or female. Female plants produce the buds we know and love, while male plants produce pollen sacs that don’t produce much THC and other cannabinoids. In addition to the fact that male plants aren’t good to smoke or use, the pollen they produce causes female buds to become seedy. No one likes seedy buds, and if buds are heavily seeded, it starts to reduce the potency. Unless you’re planning on making seeds, you probably want to identify and remove male plants as soon as possible.

Example of a supercropped plant. This plant wasn’t trained to grow in this shape from a young age. It grew tall and thin so the grower bent all the branches at right angles to dramatically reduce the height and create a desirable table-top shape that ensured all buds got as fat as possible.

Another related issue is “herms” (also called “hermies”) which is short for hermaphrodite plants. These plants produce both buds and pollen on the same plant. That means you could have a plant you think is female, but if it starts producing pollen you’ll still end up with seedy buds.

Fans are a must in a grow space to move air around, so buy some of those before an AC unit. If you find that fans aren’t bringing down the temperature enough, then you may want to invest in an AC.

Odor becomes much more difficult to manage in the final six weeks of a marijuana plant’s life, when trichomes and terpene production ramps up. You can also get odor-absorbing gels, which replace weed smells with other scents. Keep in mind that odor gels don’t eliminate odors, but simply mask them.

Generally speaking, it takes anywhere from 10-32 weeks, or about 3-8 months, to smoke what you’ve grown. (It’ll be quicker if you start with a clone or an autoflower seed.)