Wtf? This is judgy as shit why are people upvoting you

It's really not. The fuck are you even doing

Devolver Digital is anything but normal when it comes to video games. This time, their bringing another developer, Vile Monarch, along for the ride in their new endeavor, and their new IP sort of smells like weed. Both companies have announced a brand new PC tycoon simulator game, Weedcraft Inc., where you grow, breed, and sell marijuana in the United States.

In addition, the player will also have to micromanage the business, such as keeping costs to a minimum, making sure profits are above average, and hiring workers to help run it. This includes what type of marijuana plants to grow, how much of it you want to sell, and keeping an eye on the market and competition ensuring that your business wins out over the rest. It’s an interesting concept that’s hidden as a tycoon simulator game, and makes us take a look at how the country views the practice of selling and using marijuana. This is right up Devolver Digital’s alley, as they are known for developing and publishing unique video games such as, Hotline Miami, Shadow Warrior 1 +2, the Serious Sam series, and Hatoful Boyfriend. The actual developer of the game, Vile Monarch, is known for their hilarious fighting game, Oh Sir!….The Insult Simulator, and it looks like they’ll be bringing that humor along for their new pot-influenced game.

Along with the announcement came a reveal trailer, showcasing clips (new and old) on the anti-weed propaganda, as well as the movement to legalize it over the past several years. Some gameplay was also shown, and the best way to describe it is that it’s Roller Coaster Tycoon meets Sim City, but with marijuana. The player will be tasked with maintaining a business that specifically deals in the production and distribution of weed. The idea of a marijuana business is an idea that already has some controversy surrounding it, as the political and cultural ramifications will be played out to the player firsthand, giving them an idea of how their business is affecting the area around them. For example, you can expand the business any way you like, with the ever increasing risk of politicians and police breathing down your neck to see if you’re legitimate or not. On the other hand, you can actually choose to bribe officials with weed and favors to get them to turn a blind eye from your operations. 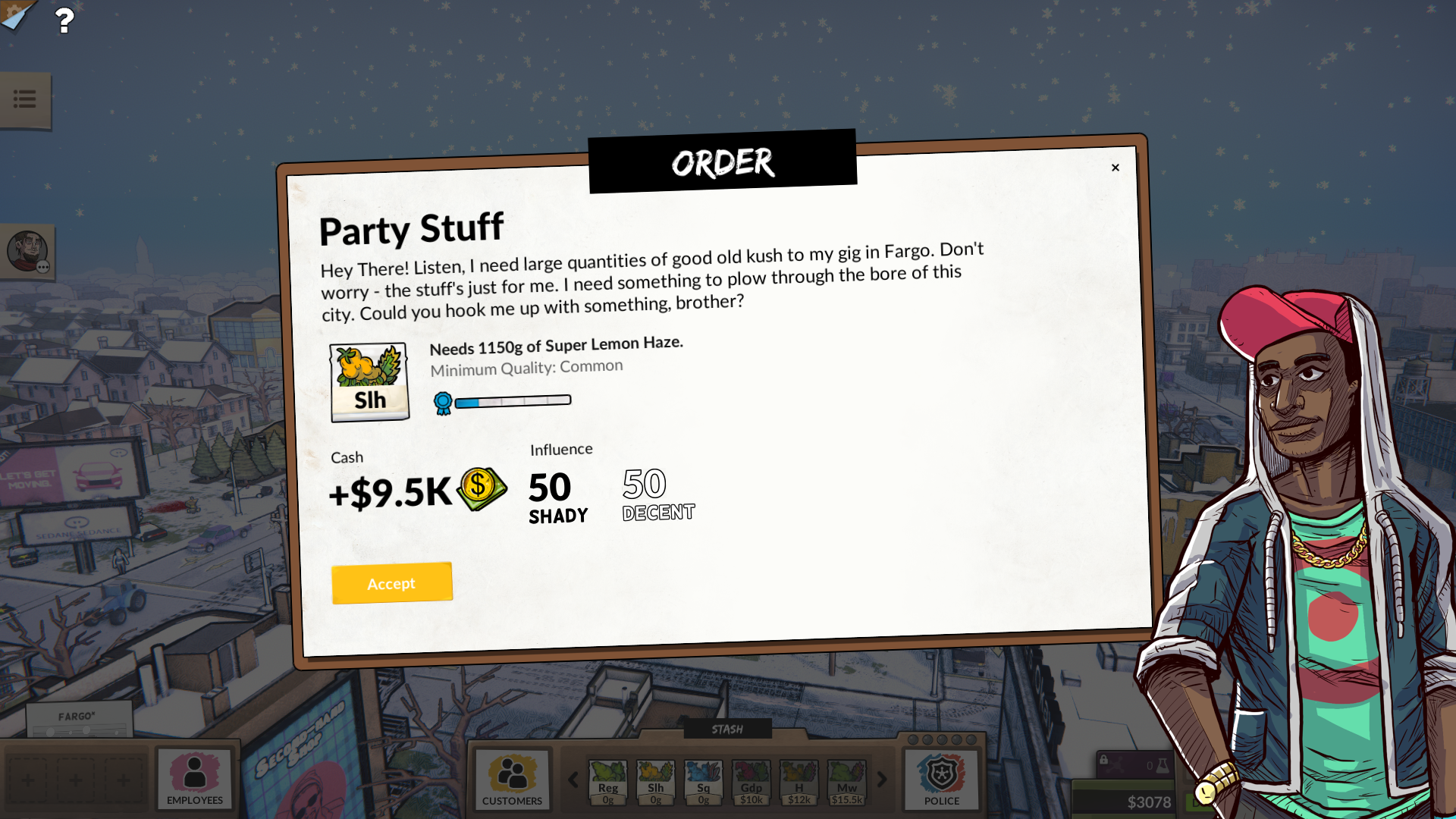 Want us to remember this setting for all your devices?

Please enter your date of birth to view this video

As Devolver says, Weedcraft Inc. “explores the business of producing, breeding, and selling weed in America, delving deep into the financial, political and cultural aspects of the country’s complex relationship with this troublesome and promising plant.” The game puts players in the role of a business school dropout whose father recently passed away. When you return home, you learn that your brother, Clyde, had been growing marijuana for your father in your basement, and the two of you partner up to turn his supply into a business.

Devolver Digital and developer Vile Monarch (the studio behind Oh. Sir: The Insult Simulator) have announced Weedcraft Inc., a new simulation game coming to PC via Steam in 2019. Billed as “the burgeoning legal pot industry’s first fully fledged tycoon game,” Weedcraft Inc. allows players to cultivate their own weed empire, from growing different strains of bud to distributing it and, ultimately, trying to change the country’s perception of the plant.