Apply a soil fumigant, such as dazomet, to the soil, following the product’s directions. Use a rototiller to a depth of 2 to 3 inches to mix the fumigant with the soil.

Clear the mulch away from areas where you wish to plant. Cut a hole in the tarp with scissors 1 to 2 inches wider than the size of the plant’s root ball.

Remove the tarp one week later. Use a rototiller on the soil to a depth of 2 inches. Do not till any deeper, as this may bring dormant weed seeds to the surface and promote new weed growth.

Dig out the soil exposed through the holes in the tarp with a small garden shovel. Make the depth of the holes approximately 1/2 inch deeper than the height of the root ball.

Lay the tarp down on top of the soil. Ensure it is laying flat and covering all the soil.

Water all the soil thoroughly.

Place the plants in the holes and fill around the root balls with the soil. Clear off any excess soil from the top of the tarp to inhibit weed growth on the surface. 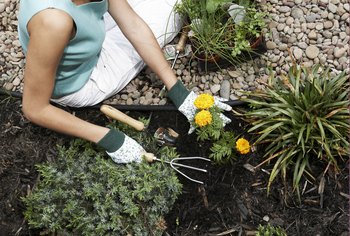 The simplest and “greenest” option is to spend time pulling weeds and seedlings as they appear, especially early in the year when they’re not yet well-established and haven’t seeded. If that’s more work than you’re capable of taking on, a preemergent herbicide — one that prevents weed seeds from germinating — applied throughout your rock feature can minimize weeds. Read and follow the manufacturer’s directions, and be wary of using it anywhere that might drain to your garden beds.

Over time, blown-in dust, leaves and other organic matter form a new layer of soil between, under and around your rocks. Weeds will inevitably grow in that new soil, so you’ll need to have a plan for dealing with them. One option is to disassemble your rock feature every few years and hose the dirt out from around the rocks, but that’s time-consuming and costly.

Also, your strategy should differ depending whether your rock landscaping will surround plants. If so, leave a plastic-free ring around each plant that roughly represents the size of its expected root ball at maturity. This way, water and nutrients can reach the roots. It’s also very important to loosen and enrich the soil that goes beneath the plastic, to counter the tarp’s tendency to reduce fertility.

On the downside, tarps and other forms of plastic are completely impermeable to water. Any rain that falls on the rock-covered portion of your property just runs off, without sinking into the soil and being retained for use by nearby plants or lawn. Also, the impermeable plastic cuts off oxygen and suffocates living organisms in the soil under the rock beds. Between that and the weight of the rock, you can turn fertile topsoil into sterile, compressed “hardpan” in a surprisingly few years.

Landscape fabric is also used to help deter weeds, and it’s often advertised as “weed-control fabric.” That’s a bit misleading because it only provides truly weed-free ground for a year or two. After that, organic material begins to build up between the rocks, weed seeds blow in and weeds begin to grow again. They can be even harder to eliminate because their roots eventually become entangled in the fabric. Also, all but the best and highest-cost landscape fabric breaks down after a few years, allowing weeds to begin growing up through the old barrier again.

Putting a tarp or some other form of heavy plastic sheeting under the gravel instead of landscape fabric can be an appealing alternative in some cases. It may be less costly than high-end fabric, for example, and the plastic can be found in relatively large sizes. That means you can potentially cover the entire area under your landscaping with a single sheet, leaving no seams where weeds can penetrate.

Landscape fabric serves a few key purposes under rock landscaping. First, and most importantly, it keeps your rocks and their supporting sand or gravel from sinking into the soil under their own weight. The fabric also helps stabilize the soil and reduce erosion, a key consideration in areas where it rains frequently.

Maintaining a visually attractive property that’s also ecologically sound requires some careful thought. Using native plants wherever possible is one option, and shunning plants entirely in favor of rock beds is another. Rock beds are low-maintenance — though never no-maintenance — when done right, and doing it right involves placing a barrier between the rocks and your soil. The barrier of choice is usually heavy-duty landscape fabric, but tarps or other types of plastic can sometimes be an acceptable substitute.

If you decide to go with tarps or other plastic instead of conventional landscaping fabric, choose something with built-in UV protection. Otherwise it will simply break down after a few years in the soil, and you’ll need to dig it up and start over. 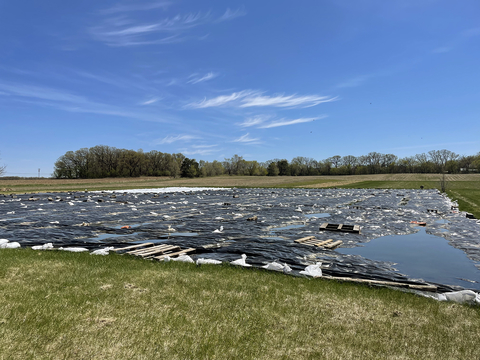 Heating the soil can have significant impacts on soil biology, but these changes are not necessarily negative. There are few studies about the long-term impacts of soil solarization on microbial communities, but it is an emerging area of research.

Common materials for occultation on a small scale include common tarps and cardboard. On a larger scale, you can use silage tarps and old billboards. Since these materials tend to be relatively heavy, you can use sandbags, bricks or other heavy objects to weigh down the edges.

Tilling prior to solarizing or using occultation will speed up the process and can have the added benefit of aerating soil that has been compacted.

Clear plastic tarps from your local hardware store (2-6 mil) are sufficient for polarization. The process typically takes around 2 to 3 weeks during hot summer months. The process is complete when the vegetation underneath the tarp is dead.

Moisture is a key ingredient for weed seed germination, so watering before installing your tarps will improve performance. Water until the soil is moist down to about 12 inches before adding tarps.

Why choose occultation over solarization?

Tarps blow away easily and need to be held down.

While occultation takes longer, there are a few benefits.